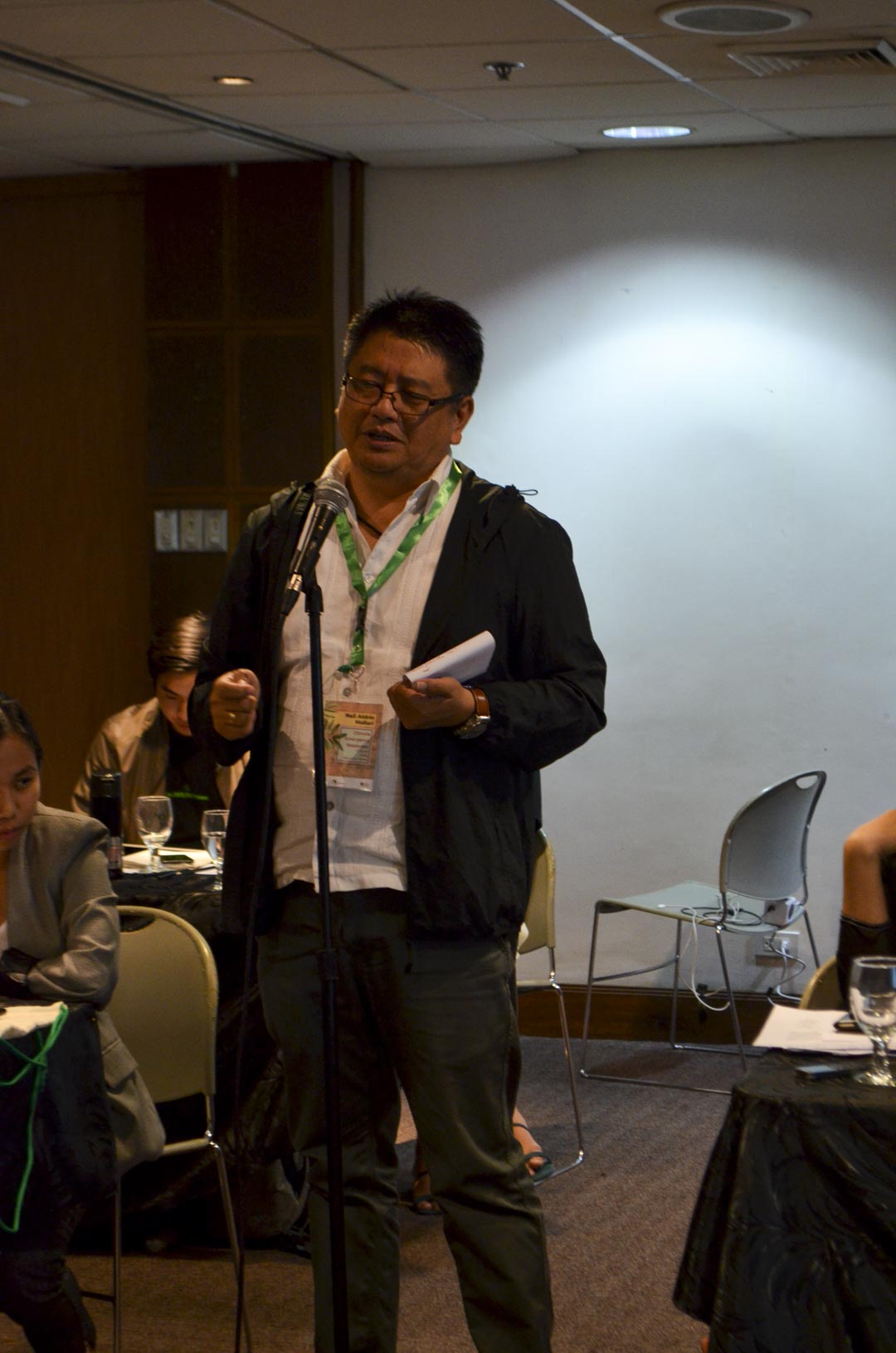 Dr. Neil Aldrin Mallari of CCIPH giving his distillation after the discussion 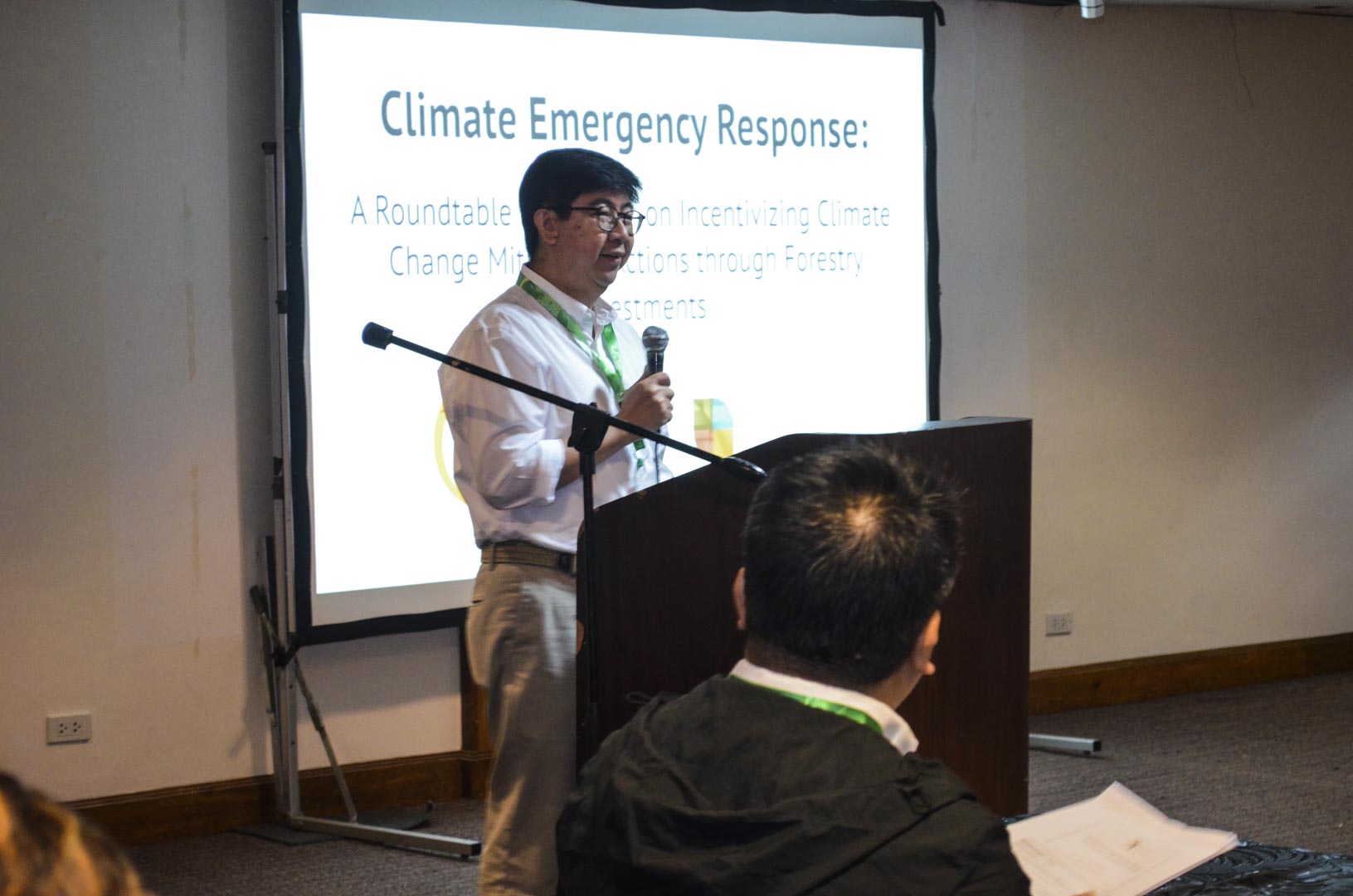 “There are 2 unsexy words in the work that we do,” said Atty. Onggie in his welcoming remarks, “The first is conservation, the second is climate change. And fortunately for us this morning, we are trying to change that. We hope that climate change is something that  takes resonance and compels us to take action. And that conservation becomes a mode of thinking about things that we do and thinking about the way we live our lives. So despite being unsexy, those 2 words, we think that it’s still something that the foundation (FFP) and all of our stakeholders and partners need to work on. And we think we have one of the key letter C words as well and that is something we want to promote this morning. So if we want to tackle climate change, if we want to talk about conservation, we have to introduce collaboration and this is something that Aldrin (of CCIPH) and his team brought forward to us and suggested that we hold the beginning of this dialogue, this conversation with private sector,  government, and civil society organizations.”

Speakers for the round table came from both government agencies, such as Assistant Secretary Ricardo L. Calderon of DENR, FMB, CCC, and DTI, and the private sector. Speakers from the private sector represented a range of industries from renewable energy (EDC, TEFI), Shell with oil and gas, and business conglomerate Ayala (Ayala Corporation, Ayala Land, AC Energy, APMC), which had the most representatives. These speakers work for businesses that take on the challenge of spearheading solutions that are nature based and thus are able to give valuable inputs that benefitted government agencies moving forward, as well as other private sector companies and organizations that can learn from and eventually partner with.

Participating groups (Coca-Cola Foundation, Masungi Georeserve Foundation, BSD, ASSIST, GIZ, USAID, IFC, UNFAO, ICTSI, etc.) were also invited to listen on the discussions and share their inputs on climate change mitigation, climate change resiliency, and the important roles each sector is contributing. The attendance in the room, proves just how vital dialogue among government agencies and the private sector is important.

In his distillation of the discussions, Dr. Aldrin mentioned the many initiatives done by the private sector groups that were in attendance (GCash Forest of Mynt, BINHI and Kasibulan programs of EDC and AC respectively, conservation estates such as Masungi, etc.). He also highlighted that the challenge today is knowing if we have done enough and if we are actually moving forward with these RTDs, policy papers, and meetings. The invited participants are proof of such a concept. What we must attain for is creating a safe space for businesses, enthusiasts, and specialists — that may have opposing opinions — so that they can continue to converse and collaborate, and that we won’t be stuck with preaching to only our friends.

All speakers and participants are doing their part, in their own ways, to inculcate into the business culture that safeguarding the environment is safeguarding their natural capital. This was the first of a series of roundtable discussions that CCIPH has planned for the upcoming months. This initiative is an initial step to hasten incentivizing climate change mitigation strategies of the private sector through forestry-related investments. It provided an opportunity for dialogue on the gaps and needs of both the government and the private sectors to deliberate on the approaches and policies currently in place. A policy paper will be one of the main outputs of this initiative, which aims to propose government incentives (fiscal and/or non-fiscal) for the contributions of the private sector to climate change mitigation and hopefully, pave the way towards a more collaborative management. Another main output is the unlocking of barriers and opening-up of more support from the private sector to curb climate change impacts.